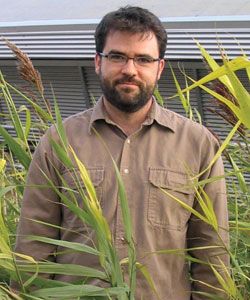 A Group Effort: Hard work and a good team are the keys to Brent Wootton’s success.

At an early age, Brent Wootton learned the importance of symbiosis. His eco-education started with walks by a stream with his mother. “She used to point out the frogs and turtles and tell me they were important,” he says. “That’s probably where it all started.”

An ecosystem approach requires collaboration, and it’s a philosophy Wootton brings to his work with Fleming College’s Centre for Alternative Wastewater Treatment (CAWT).

As CAWT’s director and senior scientist, Wootton is at the helm of a world-class laboratory, testing new technologies and building partnerships and community relationships. In five years, his team has grown to include 12 staff, 25 part-time student technicians, five research faculty members, and partnerships with 12 universities, seven government ministries, and over 35 companies. Together, they have raised over $6 million in funding and have worked on more than 40 projects.

“It’s well established that networks and groups of people that work collaboratively can produce and achieve greater things than individuals do alone,” says Wootton.

He’s got the track record to prove it. Since the Centre’s inception, the team has produced successful research results on constructed wetlands in the Arctic as part of International Polar Year and continues to receive funding for this work. They’ve worked with the United Nations Environment Programme (UNEP) to develop SubWET software, a free, downloadable tool used by engineers to design water and wastewater solutions. They’ve achieved the highest standards for water testing, and have increased lab proficiency to include metals and trace elements.

“After the first few successes, you realize you can do this,” Wootton says. “It’s mostly about perseverance, elbow grease, and good people.”

As a result of these successes, Wootton’s expertise is in high demand—he has worked on teams all over the world. In 2010, he was invited to participate in consultative meetings on environmentally sound technologies for wastewater management at UNEP offices in Shiga, Japan, and was later invited to participate in the United Nations’ wastewater task force meetings for the World Health Organization. He has also travelled to China several times to advise the country’s water and wastewater challenges.

Wootton’s vision for the future includes a thriving, innovative Canadian water sector. As a board member of Ontario’s Water Technologies Acceleration Project (WaterTAP), he sees nothing but opportunity. “We’re lucky to be part of a jurisdiction that sees water as an important area for growth,” he says. “We have to take advantage of it.”

Another of Wootton’s hopes is to continue CAWT’s work on researching and promoting low-cost, passive, effective technologies for use in developing countries. He believes Canada has an important role to play, and that Canadian communities, especially ones suffering from deferred maintenance, lacking infrastructure, and poor water quality, may also stand to benefit.

“Only good comes from connecting people with ideas,” says Wootton. “From local to national to international, it’s a fairly easy leap when you start doing that.” — Kerry Freek

“Brent is truly a global citizen. He has just the right mix of skills to make a real difference.”