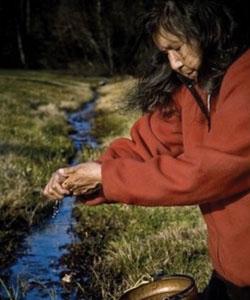 Foot Patrol: When it comes to her efforts to protect Canada’s Great Lakes, Josephine Mandamin walks the walk—literally.

In the spring of 2012, Josephine Mandamin, an Anishinabe elder originally from the Wikwemikong Unceded Reservation on Manitoulin Island in northern Ontario, will receive her bachelor of arts from Sault Ste. Marie’s Algoma University. But when it comes to water conservation and the role that aboriginal women can play in those efforts, she’s long been the one doing the teaching. Since 2003, Mandamin has led the annual Women’s Water Walk, which began with the circumnavigation of Lake Superior. Walks around Lakes Michigan, Huron, Ontario, and Erie have followed in the years since.

Why does she do it? Mandamin says that the decision to “walk for the water” wasn’t so much a deliberate choice as a natural response. “It was something that needed to be done,” she says. “It was prophesied by our grand chief, Eddie Benton-Banai, that thirty years from now—this was in the year 2000—an ounce of water is going to cost as much as an ounce of gold if we continue with our negligence. I felt like I needed to do something about that.”

The problem, she says, is that most people are waiting for somebody else to deliver a solution to the ongoing problem of freshwater depletion. “They think that some scientist will come up with something. There just seems to be complacency about everything.” Instead, Mandamin thinks that we could learn from the traditional aboriginal view of water as a living thing that deserves to be respected rather than a commodity that needs to be managed. “We think of it as something very special,” she says. “You have a kinship to it, like you would with your mother and grandmother. You wouldn’t sell them off, and it’s the same with water—it’s prostitution of our water if we sell it.”

Mandamin is a supporter of Japanese author and entrepreneur Dr. Masaru Emoto’s work. He has theorized that the chemical structure of water can be influenced through prayer, music, or even attaching written words to a container filled with it. “As a child, I knew that water could feel, water could sense, water could hear what you’re saying to it and could carry your messages,” Mandamin says. “There is spirit in the water that we really have to pay attention to, and if we do we can hear it ringing—ringing or singing.”

Mandamin is planning another walk for 2012 that will circumnavigate Lake Nipigon, a smaller lake that drains into the Nipigon River before feeding into Lake Superior.

She believes that her expeditions are having a positive influence on the attitudes of the people she meets along the way. “When they see us walk the talk, they come and ask us what we’re doing. They really want to know what they can do about it in their own community, and we try to tell them that our role is to take care of the water and we need to look at it in terms of seven times seven generations from now—what are we going to leave for our next generations? Are they going to see Lake Superior dried up—is that what we’re going to leave behind?” — Max Fawcett

“There is inspiration in Josephine’s compassionate, simple approach to highlighting the importance of water in everyone’s life.”