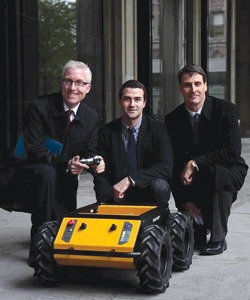 When Clearpath Robotics was recognized as part of 2012’s Water’s Next, the company had begun to take the water industry by storm with its Kingfisher M100 unmanned surface vessel, designed to travel to areas that might be difficult or unsafe for humans to access.

One year later, the Kitchener, Ontario-based company has put its grant from Ontario Centres of Excellence to good use, taking the Kingfisher to the next level.

The M200 is currently used by environmental consultants in both the private and public sectors to perform bathymetric (underwater typography) data collection, dam inspections, and harbour surveillance. Further developments might also make the M200 useful in the general research and defense industries.

In addition to providing the means, Clearpath Robotics also performs bathymetric research for some of its clients, including municipalities, conservation authorities, and private companies.

Rendall’s favourite example of the M200’s capabilities is its use in the mining industry. As industrial water storage locations for mining operations, tailings ponds can contain many chemicals and contaminants that must be monitored as they settle to the bottom of the pond. They’re dangerous to humans, but all in a day’s work for the Kingfisher M200, which can monitor a pond’s bathymetric data while the human surveyor stands on shore with a remote control.

“This really emphasizes the safety features of Kingfishers,” says Rendall. “You can go to a site, drop our vessel in the water, and control it remotely.”

Plans for future development include expanding the Kingfisher’s use from collecting depth data to collecting information about the water itself.

With the trajectory that Clearpath Robotics has taken so far—including its PartnerBot grant program that supports robotics research by donating $100,000 worth of equipment to research teams from all over the world—it’s easy to imagine this next move becoming a reality. – Jessie Davis

“In reducing the costs associated with gathering critical information about our water resource, solutions like the Kingfisher can have far-reaching benefits.”