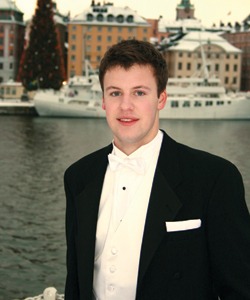 When Water Canada spoke with Ontario high school student Adam Noble, he was one week from his first face-to-face meeting with Prime Minister Stephen Harper. The two were scheduled to chat about the potential applications of Noble’s research, which has been funded in part by NSERC—a possible first for a high-school student in Canada. “I want to thank him for the support the federal government has given me so far,” he says.

But he also had a secret agenda—to convey the importance of funding primary research.

“My research has an industrial application, so things have been working well for me,” he says. “Primary research is more expensive, and you don’t always know how it’s going to work out. But it’s very important. That’s what I want to make apparent.”

How did Adam Noble get from Lakefield District High School to 24 Sussex Drive?

In the process of developing an early science fair project, Noble studied the relationship of various forms of algae and their interactions with silver nanoparticles.

Used very widely as an antibacterial agent, nanosilver is a growing concern. Exposure has been linked to health problems, and particles are between one nanometre (nm) and 100 nm in size, making them difficult to filter during water and wastewater treatment processes.

Noble discovered one form of algae in the euglena family which has an affinity to absorb nanosilver. In effect, it captures these particles and makes filtration happen more easily.

After coming up with his filtration system, Noble wanted to see if the nanoparticles were toxic. He applied for and received a permit from the Ministry of Natural Resources to grow lake trout embryos and found that even before they hatched, the fish had nanosilver particles in their gills. After culturing the embryo gill tissue for 48 hours, he found that the nanosilver had induced cancer in the cells.

Noble is concerned about what these results mean for humans. “We’re being exposed to extremely high concentrations of it every day. Some of the highest levels are in baby toys,” he says. “While nanosilver is efficient at killing bacteria, we don’t have full knowledge of how it interacts with other organisms.”

Noble’s pursuit hasn’t stopped with this discovery. While he completes his final year at Lakefield District High School, the international science fair grand award winner maintains a part-time position as a research associate in the Dr. Neil Emery Biology Laboratory at Trent University. There, he is researching ways to reuse recovered nanosilver.

Future plans include establishing a holding company (Noble will be CEO) and continuing research in the field of nanosilver and health. But first, this high-school student says he has to tackle a challenge that can often seem more dizzying and complicated than solving the world’s water problems: university applications.

“Adam will be one of those Canadian innovators that we read about in our history books.”