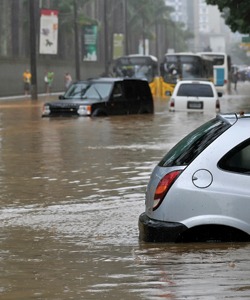 For the insurance industry, knowledge isn’t just power—it’s also what keeps it solvent. Its business model depends on being able to build accurate risk models and price out policies accordingly. But, as recent extreme weather events like last fall’s Hurricane Sandy have demonstrated, those models may not be able to rely on the past in order to predict the future the way they once did. “The losses in the past, which is normally what we use as an industry, were no longer a good indicator of losses in the future,” says Robert Tremblay, the director of research for the Insurance Bureau of Canada.

That’s bad news for insurance companies, whose viability depends on their ability to effectively assess risk, and for homeowners who may find themselves in a situation where those insurance companies are either unable or unwilling to provide them with coverage. But it’s almost certainly worse news for municipalities across Canada that are faced with aging infrastructure and a federal government that doesn’t appear terribly interested in helping them upgrade it.

Enter the Insurance Bureau of Canada’s Municipal Risk Assessment Tool (MRAT). It combines insurance claims data, detailed information about buried municipal infrastructure and climate modeling to predict where catastrophic sewer back ups, which can cause millions of dollars in damage, is most likely to occur. More importantly, perhaps, it also helps municipal governments devote funds from their limited capital budgets to the areas that need the most attention and establish or alter development priorities accordingly.

The approach that informed the MRAT was, for the insurance industry, a fairly novel one. “The standard engineering approach is always bottom-up—you build computer models that will give you a good approximation of what the performance of infrastructure will do under certain conditions,” says Robert Tremblay, the director of research for the Insurance Bureau of Canada.

“MRAT is, on the contrary, a top-down approach. We’re taking a limited number of indicators and developing a risk formula which can then show visually where the risk areas are, and what the probability is of having a sewer back-up for given areas within a system. It’s kind of a primary screening tool that shows you where the problems are. From there, the municipal engineers can look at why they’re like that.”

The project has been tested in nine municipalities, and after some final testing in March it will be ready to roll out nation-wide. It’s an approach that Tremblay believes can be applied to other areas as well. “We calibrated this tool for sewer back-up, but the same kind of approach could, theoretically—and relatively easily—be used to determine the probability of failure of water distribution networks or the incidence of in-land and urban flooding. Those are future potential applications, and I’m sure there could be more.” – Max Fawcett

“As we try to figure out our reaction to the potential impacts of climate change, this tool may hold many of our answers, or at least provide a basis for making the tough decisions that will have to be made.”