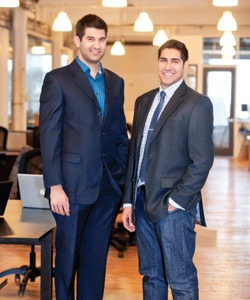 When Ontarians Sunit Mohindroo and Ahmed Badruddin met in Seattle while working at Microsoft five years ago, little did they know the impact they would have on the water industry back home. As their friendship developed, so did their idea for WatrHub.

“We wanted to do something more impactful to social issues,” says Badruddin, “so we came back to Ontario and spoke with water industry leaders and policy makers.”

The general consensus was that decades-old data, isolation of water professionals, and archaic research processes were slowing down innovation in the water sector. The pair realized the potential of a software application that could streamline the research process and provide accurate, timely information about different aspects of the water industry to improve information flow.

“Our real vision is to make water information accessible and actionable,” says Badruddin.

“We started more in water news,” says Mohindroo, “but quickly found that data was more important.”

WatrHub uses natural language processing algorithms to search, sort, and filter information just like a research analyst would, except instead of weeks compiling and sifting through its findings, the application makes it possible to access relevant, current data in just minutes.

The design itself is clean, sleek, and simple to use. It would appear that Badruddin and Mohindroo have built brains and beauty into WatrHub.

“It’s not just about the information, but also how you present it,” says Mohindroo. “We’re taking a customer-centric approach to building the platform.”

The strongest need among clients so far has been for facility data, and the application is well on its way in compiling it; most of southern Ontario’s water facilities have already been covered, with the goal of compiling data for facilities across Canada, North America, and beyond.

This facilities-based data can allow local governments to compare water infrastructure and policy in other cities, or assist manufacturers in approaching facilities that might be in need of equipment upgrades. From a financial standpoint, the application can enable potential investors to research a facility and its peers in order to make an informed decision.

As WatrHub grows, so do its uses.

“People are really interested in what we’re building. Our use cases are growing, clients are asking for more tools, and we’re beginning to expand the application,” says Badruddin. – Jessie Davis

“Creating an effective information-sharing platform could really serve to accelerate innovation in the Canadian and North American water technology markets, and significantly bolster the capacity of engineers and municipal leaders to move toward the best strategies for water management in their projects.”