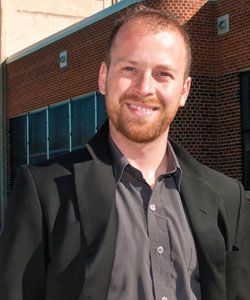 25-Litre Hero: In his own home, Kevin Freedman puts global water use into perspective.

Kevin Freedman is up early, taking his six a.m. sponge bath. The bucket he’s using is filled with water from his daily allotment and when it’s time for his final rinse, he accidentally drops it. As he watches the warm, soapy water swirl down the drain, he knows what he must do—and it literally makes him cringe.

Trudging downstairs from the bathroom, he taps into his reserves. He is covered in soap and impatient, so he doesn’t heat it up this time. His last rinse is completed with water he can only describe as “glacial.”

He is in the midst of the Water Challenge, a project he started in 2009 as a personal experiment to find out if he could live on just 25 litres of water per day for an entire month. He has succeeded each and every year, learning new techniques each time and raising awareness for water issues around the world. In its first year, the challenge raised just over $1,000 for UNICEF, while donations in the last two years have been made in the form of water use reductions totaling more than 300,000 litres in 2010 and one million litres in 2011.

To put things in perspective, the average Canadian uses 335 litres per day for necessities like bathing and drinking, but also for things like watering lawns and washing cars. According to the 2006 United Nations Human Development Report, the average water use per person in developing nations is a mere five litres per day.

With a lifelong interest in environmental issues, Freedman had always wanted to reduce his water use. “I remember jotting down how much water I used, and it made me wonder how little I could use,” he says.

Asked about whether or not living on 25 litres of water each day is feasible as an everyday lifestyle for Canadians, Freedman is thoughtful.

“I think it could be realistic, even in the world we live in now,” he says, adding that it’s not for everyone. “The people that need lush, green lawns and shiny cars will not want to do this.”

<a href=”https://waterconservationchallenge.wordpress.com” target=”_blank”>His blog</a> outlines his experiences on a near-daily basis, explaining the trials and learnings of the challenge, from reusing greywater for flushing toilets to remembering to carry a refillable water bottle wherever you go.

The challenge, however, doesn’t stop there. Having done over 40 presentations on water conservation issues to schools and community groups in Winnipeg in 2011, Freedman still feels that it’s not enough.

“We need more people across Canada to complete the Water Challenge and volunteer to share their stories,” he says. This is especially necessary in schools, “because the kids really seem get it.”

“They have really thoughtful questions, and then you see that flash of appreciation in their eyes for what we have here in North America.” — Jessie Davis

“Kevin’s efforts have reached a growing audience and have inspired people locally, regionally and nationally to change their water consumption habits.”