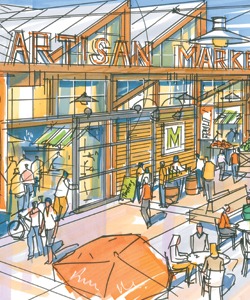 Sometimes it’s the simplest changes that matter the most. That’s what one residential developer is hoping, at least, when it comes to the Okanagan Valley and its increasingly stressed fresh water resources. The area’s tantalizing combination of hot summers and skiable winters is attracting thousands of new residents each year, and it’s expected that the region’s population will increase by 50 per cent over the next 20 years. If water usage patterns don’t change dramatically, Canada’s only semi-arid desert could very easily run completely dry.

That’s where the New Monaco Enterprise Corporation comes in. While it might seem obvious that the conspicuously lush golf courses and massive vineyards that feed the area’s tourist-friendly wineries are the region’s biggest water hogs, it’s actually the lawns and gardens of the people who live there that are the biggest offenders. According to a water budget that was completed recently by the Okanagan Basin Water Board, 25 per cent of the region’s supply of water goes to keeping the grass green on everyone’s side of the fence, a figure that’s more than double the Canadian average. If people who live in the Okanagan don’t change the way they use water, there won’t be enough of it left to support them.

New Monaco, a project that will break ground this year on the arid hillside above Peachland, intends to show people that residential development can be done differently—and better. “A lot of us who are on the project have spent a good deal of our professional lives pushing the edges around sustainability,” says Mark Holland, New Monaco’s VP of development and project manager. “As a matter of principle we don’t tend to like to take on a compliance attitude towards things.” The project’s desert-friendly landscaping and multi-family structure will reduce, by more than half, the amount of water used when compared to the average Okanagan home.

New Monaco will also serve as a demonstration project to other communities who face the same challenges. It has partnered with faculty members and students from UBC-Okanagan, who will use New Monaco as a field experiment through which to develop and test theories about sustainable development in the Okanagan. New Monaco is even partnering with the university to secure an NSERC post-doctoral researcher, who will work with the community and the company to develop best practices for water conservation in the field of residential development.

And while it might be tempting to write all of this off as a developer that’s simply cashing in on the growing marketability of environmentally-friendly developments, Holland says that’s not the case here.

“I’ve spent 20 years in the sustainability industry now, and I haven’t seen much evidence that people will pay more for environmental performance. They will pay a little bit more for health-related things like indoor air quality and better materials, or things that make them feel more comfortable. Water efficiency? Probably not. Most folks tend to go in the other direction. They’ll pay more for a shower that has 50 heads in it rather than one that has one head, or a 300-gallon tub rather than a regular one. If there’s a market pressure that we’ll all be responding to, it’s probably the reverse.”

“New Monaco has set the standard for water smart development in one of Canada’s most water stressed environments.”