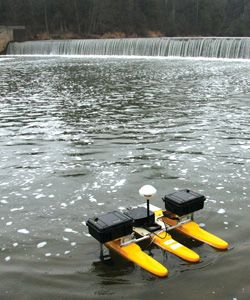 One of the major challenges we face today is developing a good understanding of the current condition of our water resources. For decades, we’ve used a variety of methodologies to gather crucial information, many of which require labour-intensive tasks, and some of which are risky. Still, there are information gaps.

When a University of Waterloo professor of hydrology saw the opportunity for automation in water data collection, he enlisted Clearpath Robotics, a local company specializing in the design and manufacture of unmanned vehicle solutions, mainly for industrial research and development purposes.

Founded in 2008, the Kitchener, Ontario-based company built the prototype and moved on to new projects, but kept receiving inquires for marine vehicles. “We had zero marketing, zero sales, and people just wanted automation on the water so badly that they sought us out,” says Matthew Rendall, the company’s CEO. “We started recognizing a pattern. If we were able to attract business without proactive investment, imagine what we could do if we put resources on this project.”

The team immediately began to consider whether the product was viable in the water sector. They began to learn where data challenges exist and shape what was possible. “We didn’t realize the magnitude of the opportunity,” says Rendall, “but everyone sees the merit of automation in their fieldwork.”

The result is the Kingfisher M100, an unmanned surface vessel designed for environmental and civil engineers. The robot can reach areas that researchers might not be able to survey in a traditional “tinny,” either due to safety concerns or inaccessibility. Users can plan their surveys (the product can be customized to sample for myriad parameters) in advance or on-site. The program is user-friendly: it’s powered by GPS and an interface developed with Google Maps. Once the parameters are set, users can launch the Kingfisher, hit the start button, allow the robot to do its work, and analyze the samples for results. Remote control is also an option, which allows users further customization.

A fast, agile, accurate robot that may also reduce survey costs by almost 50 per cent, freeing up budget to allow researchers to further develop analysis? To early adopters, it seems like a no-brainer. In less than two years, Clearpath has secured accounts with over a dozen of North America’s top technical institutions, and the Massachusetts Institute of Technology, University of Waterloo, the University of Calgary, York University, and the University of Ottawa are using the M100 specifically to accelerate their surface-water research programs.

In 2011, Clearpath’s facilities grew by 10,000 square feet, including a 5,000-square-foot manufacturing space. Additionally, the company received a grant from the Ontario Centres of Excellence to help develop the next generation of the Kingfisher. “The demand is unquestionable,” says Rendall. “So much of our greatest national resource is left unattended. We’ve got to make sure we monitor it properly.” — Kerry Freek

“The Kingfisher has global market appeal and is a powerful tool for water resources management.”