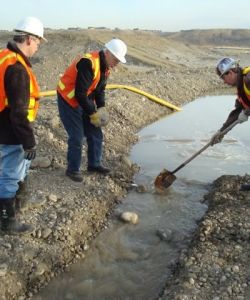 Steady Streams: Over a decade in the works, ACWA is about to make pilot testing history.

Just two weeks before his interview with Water Canada and over a decade after the project’s initial planning phase, Dr. Leland Jackson proudly observed the first running test stream of the Advancing Canadian Wastewater Assets (ACWA) project. “We made a few adjustments, but what had been designed worked pretty well,” says the University of Calgary biology professor enthusiastically.

Designed to mimic natural systems, 12 experimental streams built near Calgary’s Pine Creek Wastewater Treatment Plant will provide an environment to test new treatment technologies and examine the effects of wastewater by-products on the health of aquatic organisms. “They’re as close to being identical copies of one another as you can get,” Jackson explains. “In the absence of true replication, it could be argued that the results are about the stream and not the effluent. It helps to have standard sizes.”

The site is a researcher’s dream come true, but getting to this point hasn’t been easy.

For a project that’s in the beginning stages of construction, ACWA already has a long, complicated history. After a full-scale design and a projected budget of $62 million, issues of funding and politics delayed the project for several years, causing the team to reevaluate. In February 2011, the Canadian Foundation for Innovation gave ACWA the $10.4 million stamp of approval, joining other project funders Alberta Advanced Education and Technology, the City of Calgary, the University of Calgary, and a $1-million in-kind contribution from scientific suppliers. Now, ACWA is operating under a budget of approximately $29.4 million.

While an interdisciplinary team—ACWA boasts engineers and biologists—can have its benefits, it can also cause complications, making a big job of coordinating research themes. “We tend to think a little differently about solving problems,” Jackson admits. For example, new technologies can be evaluated over a relatively short period of time; however, it may take months to years to see changes in the organisms used to determine the ecosystem-level consequences.

Despite the complications, however, Jackson sees the collaborative approach as a major plus.

Translating the knowledge also poses a challenge. “We want to figure out how our results can be used to affect policy. Public education is also very important. We’re working on a knowledge transfer strategy.” Jackson lists several partners, including the City of Calgary, the Canadian Water Network, and Environment Canada.

Ultimately, it’s about testing and proving the safety and efficacy of new technologies. “People are not going to want to switch to a new process if it’s not proven,” says Jackson. “We want to be able to show the old way beside the new way, and demonstrate the positive environmental benefits.”

While the project has already had a long, complicated history, now the real work can begin. —Kerry Freek