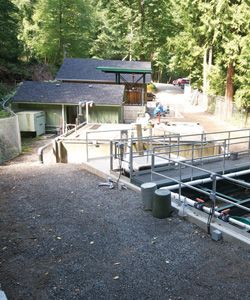 Built to Scale: When the municipality of Bowen Island needed to expand its wastewater treatment plant, it turned to ECOfluid Systems—again.

Bowen Island is almost too good to be true. Located just a short ferry ride from Horseshoe Bay in west Vancouver, it’s a popular destination for visitors from the Lower Mainland taking a day trip, as well as those looking for a more permanent home away from home. That’s why the municipality’s Snug Cove Wastewater Treatment Plant started to get just a bit too snug a few years ago. In the summer of 2005, the island’s government noticed a worryingly high level of stress on the plant during the high tourist season due to biological overloading. It was time for an upgrade.

The municipality decided to bring back ECOfluid Systems, the company that built and operated the original plant in 1999, to do the job. The plans they agreed upon were ambitious: doubling the facility’s hydraulic and biological capacity, as well as the possibility of further expanding both in the future if conditions warranted it. In addition, conditions of a grant through the province’s Towns for Tomorrow program that partially funded the project (a federal grant from the Building Canada fund provided much of the rest) dictated that the new plant also had to include provisions for waste sludge dewatering and tertiary treatment capacity that would allow processed effluent to be reused for irrigation.

It wasn’t an easy task, and one of its biggest challenges involved managing a supply chain that had to contend with ferry schedules. “The number-one challenge was deliveries,” says ECOfluid’s Justin Hebner. “With the ferries, it can be difficult coordinating things and keeping everything on schedule—you have to be a little bit flexible.”

The other major challenge was staying on budget, given that they were working under the terms of a design-build contract. “We had to fit everything into that budget,” says lead engineer Brian Chan. “We couldn’t compromise on the objectives or the scope of the work itself, but at the same time we had to look for some very cost-effective solutions.”

On the other hand, the design-build model also allowed them to make changes without seeking permission from some higher level of authority. “Being that we were in control of the design, we could make changes on the fly,” Chan says. “We were able to do some thinking on our feet and take charge—we didn’t have to go back to another engineer and go through that big approvals process.”

As a result, Bowen Island now has a wastewater treatment plant that can not only service the existing needs of the community but grow alongside them. Thanks to the conditions of the Towns for Tomorrow grant, it also has a supply of treated wastewater that can be used on construction sites and even in the toilets and garden hoses of the rapidly expanding number of homes on the island that have dual-plumbing systems. Meanwhile, the sludge dewatering will increase the dry-solids content of the wastewater sludge that’s being taken off the island ten-fold, thereby reducing the number of trucks needed to haul it off the island and their resulting carbon footprint. The municipality is even exploring the possibility of using some of those solids for on-island composting that would generate a steady supply of new topsoil.

On a difficulty scale of one to ten, Chan says that the combination of a firm cost ceiling and potentially cost-intensive green initiatives made the project a solid nine. But he’s proud of the work they’ve done and pleased with the outcome. “It’s nice to see that step in the right direction for the industry,” he says. — Max Fawcett

“Despite geographical constraints, the project team went above and beyond what was required.”