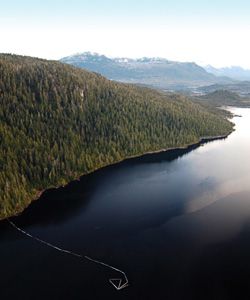 When water makes up almost 90 per cent of the product that you produce, even the smallest conservation effort can make a difference. When you’re a corporation with global reach that sells 1.7 billion servings every day, that same commitment to conservation can change the world.

The Coca-Cola Corporation is making good progress. The company has already reduced its system-wide water use by 16 per cent since 2004, and intends to push that figure to 20 per cent by 2012. It implemented a system-wide water resource sustainability standard that requires each of the company’s 900-plus bottling plants to assess the vulnerability of source water for both the plant and the surrounding communities, while also participating in 320 community water partnership projects in 86 countries around the world since 2005. By the end of 2010, it is estimated that those projects will have replenished approximately 42.8 billion litres of water, the equivalent of 31 per cent of the water used to produce Coca-Cola beverages each year.

In addition to its operational efforts to improve water conservation, Coca-Cola is using its commercial clout to stimulate change throughout its extensive supply chain. For example, it is the world’s largest purchaser of sugar, a crop that is hugely water-intensive, and in an effort to mitigate those impacts it is actively and aggressively supporting the Bonsucro Standard, a certification standard that measures the environmental impact of the sugarcane industry with a view toward reducing impact.

The company’s commitment to water conservation comes straight from the top. Muhtar Kent, who was appointed CEO of Coca-Cola in 2008, told an audience at the World Economic Forum in Davos, Switzerland in 2010 that the company was the canary in the coal mine as far as water use is concerned. “We can’t sit back and watch the water of the world continue to drain into a non-returnable abyss,” Kent said. “I propose to you that history will judge us poorly if we do not act, together, today.”

Monica Da Ponte, director of strategic partnerships for World Wildlife Fund (WWF) Canada, has seen the action that Coca-Cola is taking firsthand. Since 2007, Coca-Cola has donated over $20 million to WWF for conservation work, and some of that money has made its way to projects here in Canada. For example, over the last five years Coca-Cola has supported the WWF’s freshwater conservation work in British Columbia’s Skeena River Basin. “Their support enabled us to do climate scenario modeling,” Da Ponte says, “and we did it with the local community, which got stakeholders engaged. That approach is pretty leading-edge.”

And while Da Ponte is well aware that Coca-Cola’s reputation among many environmentalists hasn’t quite caught up with its record, but she believes that will change with time. More to the point, she says, she’d rather work with the company than against it. “Let’s say that we, as an ENGO, got Coke to stop selling bottled water,” Da Ponte says. “I’d bet that Nestle or Pepsi would jump at the opportunity for that market share. The solution is complex—it’s not necessarily about stopping the sale of one particular product, but understanding the breadth of environmental impacts and working on changing the organization and the system.” — Max Fawcett

“This proves that a major corporation can take ownership of its footprint and effectively embrace environmental stewardship.”